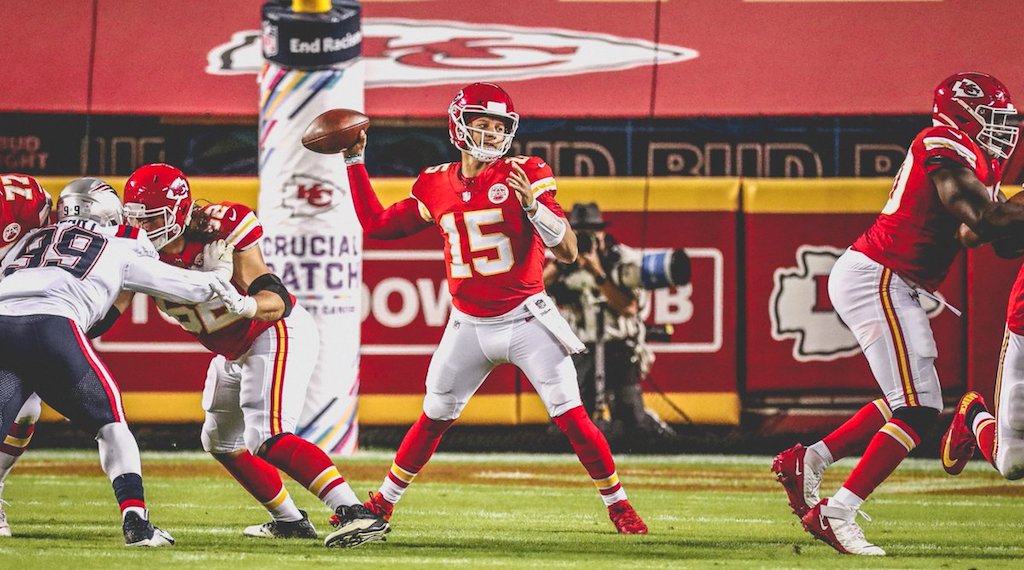 Only a handful of unbeatens remain early in the 2020 season and the NFL’s elite continue to remain at the top of the Super Bowl LV futures betting board. The Chiefs and Ravens, despite each having one loss already, are still the favorites to capture this year’s Lombardi Trophy.

There has been some movement in the top tier of teams and their respective odds to win this year’s Super Bowl. The biggest moves are the upward trend of the Green Bay Packers and the downward adjustment of the San Francisco 49ers.

Here’s a look at where the Super Bowl LV futures betting stand.

The Chiefs suffered a Week 5 loss to the Raiders but still maintain the clear favorite role given +350 odds to repeat as Super Bowl champion. Kansas City is 4-1 and is still in the driver’s seat in the AFC West Division.

Baltimore is also 4-1, it’s only loss to the Chiefs. The Ravens are listed at +600 as one of three teams under+1000. Reigning league MVP Lamar Jackson again leads an offense that scores just under 30 points a game. The defense leads the NFL allowing just 15.2 points per game.

Just a little less than a month ago, the Green Bay Packers were not what one would consider a Super Bowl favorite. Despite going 13-3 last season and having a future Hall of Famer at quarterback, the Packers were listed at +3500 in mid-September.

Where the Down Boys Go

San Francisco also went 13-3 last season and was a preseason favorite to play for and win a Super Bowl this year. After five weeks of play, the 49ers are surprisingly last in the NFC West at 2-3. They have certainly dropped when you’re talking about Super Bowl LV futures.

The Niners had the third-shortest odds at the beginning of the season but opened with a loss to Arizona. Then, the injury flood gates opened. Joey Bosa, Solomon Thomas, Richard Sherman, Ezekiel Ansah, and the list goes on…all have been placed on injured reserve. Bosa and Thomas are done for the season. A few others may return later this year.

Seattle at +800 is the other team listed under +1000 and rightfully so. QB Russell Wilson is off to an MVP-type start. Wilson is completing 72.8 percent of his passes for 1,502 yards and 19 touchdowns.

The Seahawks are 5-0 but the defense is suspect. It’s hard to believe, but a Pete Carroll-coached team gives up a league-worst 471 yards of offense and 27 points per game. Can Wilson continue to overcome that every week?

Pittsburgh is 4-0 for the first time since 1979, which just happened to be one of the Steelers Super Bowl seasons. The Black and Gold check in at +1800 to win it all.

The Bills were 4-0 heading into a rare Tuesday game with the Tennessee Titans (3-0). Buffalo is listed at +1500 and the Titans are given +3000 odds to win the Super Bowl.