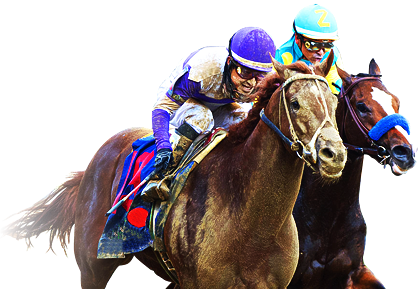 Changing Leads
At the Races
by Paul Volponi

Reduced Takeouts
Things are looking better for the bettors of thoroughbred racing. The New York Racing Association has instituted an across the board reduction on its house cut, commonly referred to as the “takeout.” The win, place and show percentage was lowered from 15% to 14%. The daily double, exacta and quinella percentage has been dropped from 20% to 17.5%. And on non-carryover days, the pick-six takeout drops from 25% all the way down to 20%. These numbers are a welcome relief to bettors trying to scratch out a winning formula at the races. During the six week Saratoga race meeting, which concluded in early September, nearly $7,000,000 more was returned to the players. The reduced takeouts are certainly a reaction to competition by other forms of gambling. Unfortunately, race fans have long been stamped by the racing industry as mere cattle that blindly follow along in their gaming habits. Not anymore. Racing’s attempt to win new fans has also helped “the old reliable bettors” to catch a long deserved break in this new era of competitive marketing.

Takeout Angle
The new takeouts in New York should bury any thought of using a two-horse win parlay over a daily double. There were still some situations in which a parlay paid more than the double. Those situations had to overcome two 15% takeouts (totaling 30%) compared to the one 20% takeout of a daily double. That was a 10% difference. The difference now stands at 10.5%, and that extra half a percent should end any issue.

Contest Thoughts
Most major racetracks sponsor handicapping contests in which the top four finishers win prize money and have their expenses paid to attend the World Series of Handicapping in Las Vegas which sports a huge cash prize. In New York, the entry fee is a rather steep $300 with all of the entry money coming back to the winning participants. Many potential entrants argue that such an entry fee could better be spent on say, three cold $100 doubles or exactas. After all, to win a contest like this you’ve got to get hot. However, you could select a succession of winning horses and still not win the contest, or collect a dime. Would this $300 bring better value at the windows? It’s a choice that every handicapper has to make for himself. Personally, I lean towards the windows, and haven’t entered a single contest with such an entry fee yet.

Eying the Pools
For years, I have been staying clear of horses that are favored in the win pool, but are not favored in the place and show pools as well. I have been rarely disappointed in the outcome. There are many reasons why a horse only takes money in the win slot, and most of them are notions you want to bet against. If I am going to back the favorite to win, I want to see that he is also favored in the adjoining pools. Breeders’ Cup Retreads
Probably a half dozen horses that race in this year’s Breeders’ Cup will put in another start before the end of December. Because of the Breeders’ Cup notation in their past performance lines, they will receive plenty of attention at the windows against lesser competition. For the most part, these runners have proved real money burners and should be avoided. The Breeders’ Cup usually culminates a long campaign and leaves little left in the equine gas tank. So if you can’t find a runner at a square price to bet against these horses, simply pass on the race entirely.

On the Track
Here are some horses to consider at the windows—Pure Prize is finally getting it all together. Thompson St. could pop at a big number. Starbury is a rugged claimer with talent. Bella Bellucci is a fleet filly just starting her career. Thunderello could get real good for trainer Lake. Carsoncitycyclone continues to race with heart. Bowman’s Band is being tutored well by trainer Kimmel.

The New York Racing Association has come up with a fascinating contest called Sudden Death. This free contest requires the player to make a daily selection that finishes in the money (first, second or third). You choose a horse that finishes out of the money, and you’re out of the contest. There is currently a $5,000 prize for the last handicapper standing. NYRA plans on using this contest during their longer race meetings. Anyone can register to play online at www.NYRA.com.