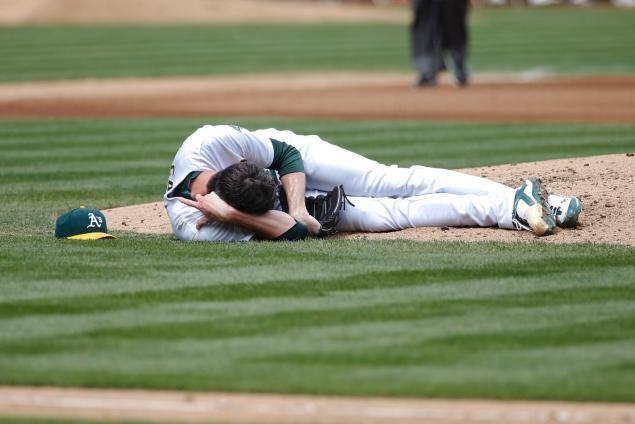 Let’s face it: Major League starting pitchers are a fragile, spoiled group. They’re paid anywhere from $5 million to $15 million to work once every five days, and they get November to February off. What a job description!

Seriously, we all know that effective starting pitching is a rare commodity. It’s also unnatural for a human arm to be asked to throw a ball 88-95 miles per hour roughly 100 times every five days. And the mechanics of pitching are even more unnatural, with the stress that curveballs, sliders and screwballs place on the shoulder and elbow. It’s no wonder pitchers get hurt far more often than positional players.

Paying attention to injuries to starting pitchers is more important than those sustained by other baseball players. It’s not just the arm, either – a pitcher throws with his legs, too – so any major or minor ailments to the knee, ankle or hamstring can influence how effective he will be.

This is why it’s essential to read local newspapers via the Internet every day to find out what teams and individual players are going through. Last month, Red Sox ace Curt Schilling complained of an ankle inury. Reports from the organization said that Schilling would pitch in Colorado and then after the game his ankle was going to be X-rayed. Now, I’m no doctor, but it doesn’t make a lot of sense to me to X-ray an athlete for potential problems after you’ve just told him to forget about it for now and go throw 100 pitches against the Rockies.

For the record, Schilling was not sharp, as he allowed 9 hits in 6 innings with 4 walks in a 7-6 defeat. And Boston was a 9-5 favorite, too. The point is that keeping up on ailments like this can help you as a sports bettor.

You can also find betting edges with pitchers who are just returning from the DL and haven’t pitched in a while. Many successful pitchers need to get into a rhythm, and throw regularly to live hitters to stay sharp. So, when a pitcher misses time (even a great pitcher), he can be ineffective in his first start back.

This happened this past weekend with Philadelphia lefty Randy Wolf. Wolf went on the DL after pitching June 2, then didn’t pitch again until June 26. In his return, Wolf wasn’t that sharp, and allowed 8 base runners in 4 innings before leaving. Wolf is a quality starter, too, and having a fine season.

But even good pitchers who come back from an injury don’t always go very far in their return debut. And that’s important to keep in mind. So, if you’re laying money on an ace pitcher as a big favorite, you don’t want the guy to go just 5 innings. Yet that often happens in a pitcher’s initial start off the DL. Sometimes, a pitcher may not be sharp or he could even re-injure himself early in the game. Also, many managers have limited pitch counts on guys returning from the DL. And then the bullpen takes over, so it’s dangerous to lay heavy wood in these games.

A few weeks ago, ace starters A.J. Burnett and Mark Prior made their first starts of the season after extended time on the DL. Their returns will certainly help the Marlins and Cubs over the long haul, but notice that both lost their initial starts (although Prior pitched well). This is not uncommon, either. Smart handicappers keep up on pitching injuries like this – even minor ones. Because every edge – even a seemingly small one – can be the difference between falling to the bookmaker or turning a profit.