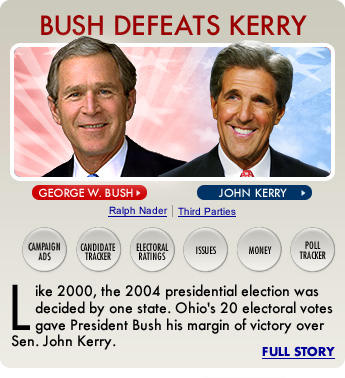 WASHINGTON — Just how likely is George W. Bush to win the 2004 presidential election?

More than four times as likely as Osama bin Laden being captured next month, but slightly less than Michael Jackson’s chances of being convicted of child molestation.

That’s if you play the political futures markets or place bets on one of the myriad of online gambling sites that feature political wagering.

In a trend that is giving new meaning to the term “political horse race,” gaming executives say political bettors have plunked down more than $500 million trying to predict the outcome of the November election.

“The closer we are getting to the election date, the more people are betting on it,” said Gregor Weiss, bet manager at Intertops.com, an offshore gaming company that is taking betting action on Bush and Democratic challenger John Kerry.

Intertops.com has seen more than 3,500 political bets this season. And while the company won’t reveal the total amount of money wagered, Weiss placed it in the “high five figures.”

Another gaming site, Bodog.com, has taken in nearly 500 wagers garnering $19,000 on Bush and Kerry bets. Meanwhile, thousands of traders at Intrade.com’s political futures market have bet about $500 million on Bush and Kerry’s chances, a company official said.

“People bet on reality shows, they bet on the weather, on all kinds of sports, obviously. On anything that’s in the news, especially anything that has one of two outcomes,” Weiss said.

“And it’s a way of articulating their support. It’s almost a pre-vote vote,” she said.

But at Intertops.com, Kerry has a slight lead at 1.74 to Bush’s 1.87 odds. Independent presidential candidate Ralph Nader is the clear long shot with 1001-1 odds.

And over at Intrade.com, which as a futures market works slightly differently, Bush’s stock is trading at 52 while Kerry’s is at 48. While Bush maintains the edge, his stock has fallen since the beginning of the year, when he was trading at 75.

And Osama bin Laden’s capture? Chances that the architect of the 9-11 terrorist attacks will be nabbed by September are trading at 12.

The trading — or “contracts,” as they are called — is based on a series of questions that can have one of only two outcomes.

For instance: Bush will be re-elected in November. If that proves true, the closing price will be 100 and if not, zero. Each point on the Intrade.com index costs 10 cents, so one share currently costs $5.20.

So, just how accurate a predictor are the bets?

Ray Fair, the Yale economist whose economic model predicts Bush will win with 57.7 percent of the major-party votes, calls political gambling “a cute and interesting thing to look at.”

Sites like Intrade.com, he said, reflect all the current information about candidates and are better snapshots of current public opinion than they are predictors of the final outcome.

“If you had a question a day before the election — Is the price a good reflection of the outcome? — I’d say yes,” Fair said. “On the last day, that’s probably the best guess of what’s going to happen, better than any particular poll.”

Trying to predict presidential elections has become a national sport.

Some base it on economics, others maintain that America does not change leaders in wartime. One study found that the taller candidate has, over the past half-century, won the presidency ten out of 13 times.

The rise and fall of women’s hemlines also is a time-tested barometer, with short hemlines corresponding to a Democratic win and longer skirts meaning the GOP has a leg up in reaching the White House.

The Redskins lost their last home game to the Philadelphia Eagles, 31-7, portending a Kerry victory.

“If the 2000 election taught us anything, it’s that you can’t bet on anything,” she said.